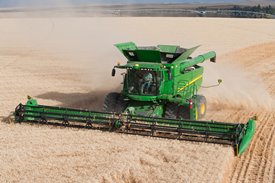 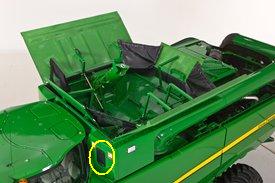 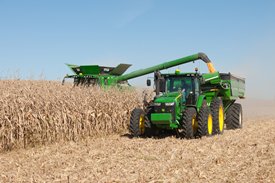 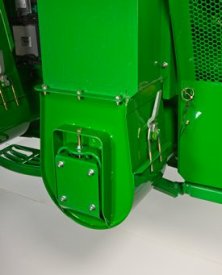 Key features of the clean-grain elevator are as follows: 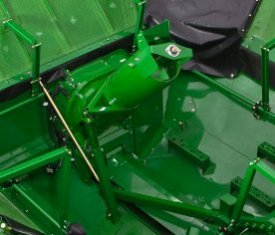 The grain tank loading auger ensures rapid movement of grain from the clean-grain elevator into the grain tank. The auger gearbox is an aluminum case featuring large, strong bevel gears immersed in oil for constant lubrication. An abrasive-resistant shield covers the gearcase to protect it from wear in abrasive crops. 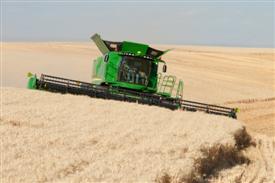 Harvesting in rolling ground and slopes

Valuable harvest time will no longer be lost shifting on hills, on slopes, and when exiting fields to start transporting. The ProDrive propulsion system is a high-capacity feature that enables John Deere S-Series Combines to maintain high levels of productivity in all terrain and ground conditions.

Mode one can be set for typical harvesting speeds. Mode two can be used when higher speeds are needed during harvest or when transporting the combine.

The productivity advantages of ProDrive include the following:

The ProDrive hydrostatic motor has a higher displacement than the previous hydrostatic systems.

Both the pump and motor are variable-displacement components that allow ProDrive to maintain high levels of torque to the ground throughout each of the two operating-speed ranges.

ProDrive provides operators with superior control of the combine ground drive through the CommandARM armrest console.

Using the navigation tools on the armrest, the operator can dial in the desired maximum-attainable speed within each of the two modes.

This feature provides more precise and comfortable control of the combine ground speed throughout the travel range of the hydro handle.

The adjustability of the range of speed can also make maneuvering the combine in close quarters and connecting header equipment much easier. 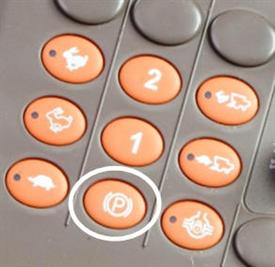 ProDrive comes equipped with hydraulic wet-disc brakes; five brake discs per side provide ample braking performance during transport or when operating on hills.

When transporting, it is recommended the two independent brakes pedals be locked together. When in field mode, the brakes pedals can be pushed individually for various terrain conditions.

When the hydro handle is moved to the neutral position, the park brake is automatically engaged to prevent unintended movement and can be locked in this mode with the touch of the park brake button on the CommandARM armrest console.

An alarm in the CommandARM display alerts the operator the park brake is engaged, if it has not been released prior to hydro handle movement. When the combine engine is turned off, the park brake is automatically applied. 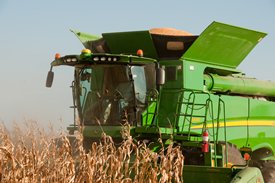 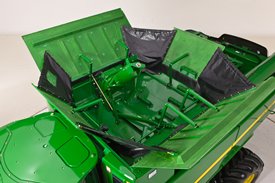 The ability to fold the 10,600-L/14,100-L (300-bu/400-bu) grain tank is designed for height-restricted areas and ease of use on the S-Series Combines. The power folding extensions/covers are made of a water-resistant composite material to keep the grain tank dry when covers are closed without grain in the tank. The covers feature vinyl corners to achieve grain tank capacity and proper folding.

The power folding grain tank option is controlled from the CommandCenter™ armrest inside the cab. Not only do the covers fold, but the fountain/loading auger also folds with a simple touch of a button so there is no need to enter the grain tank.

The power folding grain tank extensions/covers option is available on the S660, S670, S680, and the S690 combines. 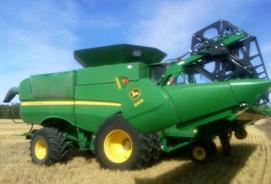 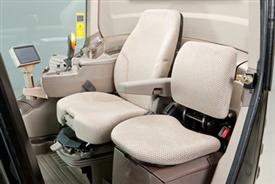 The cab offers unsurpassed visibility, operator comfort, convenience, and productivity. The combine cab is 254-mm (10-in.) wider and 190-mm (7.5-in.) deeper than 70 Series Combines. 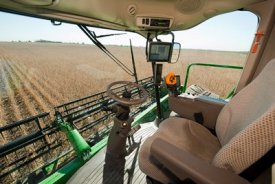 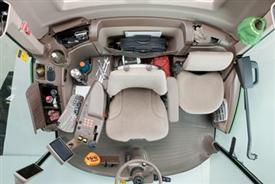 The premium cab includes the deluxe cab features plus: 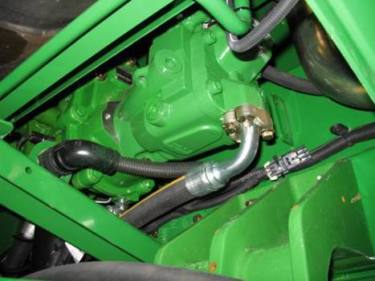 The variable-pressure hydraulic pump is an axial piston pump and features:

The closed-center system is ideally suited for S680 and S690 Combines that typically operate larger/wider headers because it: 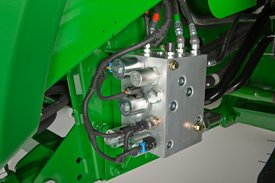 The header height valve eliminates the need for an accumulator in the header raise and lower hydraulic circuit and results in:

The header height raise/lower control valve is located on the left-hand side of the front axle frame and provides: 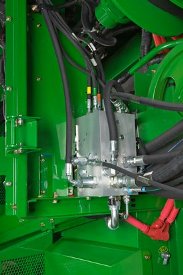 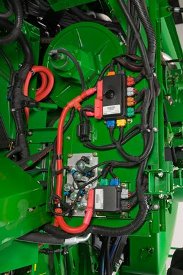 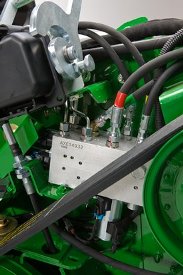 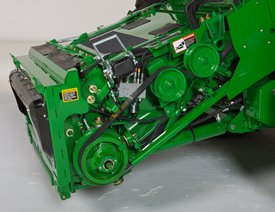 This valve controls flow rates for: 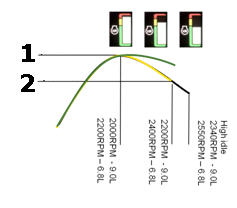 The isochronous engine governor keeps engine speed constant until rated engine power is exceeded. Due to the constant engine speed driven components remain at constant speed too, which enhances the combine overall capacity as well as efficiency. This is gained by preventing over blowing of shoe in low-load conditions such as starting a filed, down crop conditions when leaving, entering a path, that can either end in higher shoe losses or in dirty grain tank samples.

Main benefits of the isochronous engine governor include: 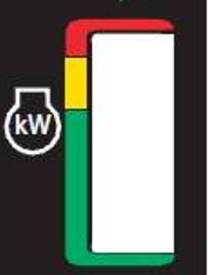 Previously, engines without isochronous governors would decrease the crankshaft speed when load was applied to the engine. Operators could hear when this happened, which gave them an understanding of the amount of power the engine was being required to output. Since the isochronous governor maintains a constant crankshaft speed independently of the engine load, a display is created to aid in the operator's understanding of the power output by the engine.

The EvenMax cleaning system has a large cleaning shoe area and a unique, multi-leveled shoe design that provides customers with superior shoe capacity. The result is a high-performance cleaning system that reduces slope sensitivity while delivering results. 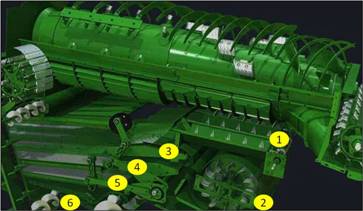 The EvenMax cleaning system begins with conveyor augers located beneath the concave, where the volume of threshed material is highest, to evenly move material onto the cleaning shoe (1). The deep auger troughs provide uniform distribution of material to the cleaning shoe with less bunching, even on sloping terrain and when harvesting up or down hills.

The sieve provides proper sizing of grain from material other than grain (5). Any grain that passes through the sieve is elevated to the grain tank while some grain or material other than grain flows to the tailings return system for reprocessing. On S650, S660, and S670 Combines, the tailings material is directed back into the threshing section of the separator for additional threshing. The tailings on the S680 and S690 Combines is directed to the active tailings return system for additional threshing then directs the material back on the return pan then onto the main chaffer for additional cleaning (6). 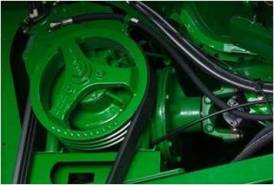 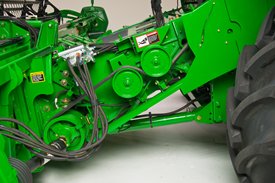 Left-hand side of feederhouse

The drive system includes the following components to provide drive capacity exceeding that of the high-torque variable feederhouse drive:

When the engine is operating at 2100 rpm, the feederhouse back-shaft speed for each of the five transmission speeds will be as follows:

The feederhouse back-shaft speed (rpm) and current gear selection can be viewed by the operator in the CommandARM™ display and is on the set-point combine adjustment functions of S-Series Combines.

Error, ensure all information is entered

The information on this page is correct at time of publish and as per John Deere Aus. We reserve the right to change content at any time without prior notice. For more information please contact us.

No matter the harvest conditions or the operator, the new S700 Combines automatically give you consistent grain quality in a comfortable and easy-to-operate environment.